This year’s Tsukahara Memorial Award was awarded to RIKEN Brain Science Institute (BSI) senior team leader, Dr. Yukiko Goda together with Dr. Yukiyasu Kamitani of ATR Computational Neuroscience Laboratories in Kyoto, at the Japan Neuroscience Society meeting, Neuro2013, in Kyoto in June. This prestigious award is given annually by the Brain Science Foundation to a researcher in the field of life science who has conducted original and innovative basic research. The award was established to commemorate the scientific contributions of Professor Nakaakira Tsukahara, a world-renowned scientist from Osaka University, who passed away in the Japan Airlines crash in August 1985.
Dr. Goda’s illustrious career has spanned several decades abroad, starting with an assistant professorship at University of California, San Diego (1997-2002) before making the move across the Atlantic to the UK to become a senior team leader at the Medical Research Council Laboratory for Molecular and Cell Biology at University College London, UK (2002-2011). In the spring of 2011, she returned to her home country to set up her current lab at RIKEN BSI. In this interview, Dr. Goda talks about her award and outlook on the future of science in her lab. 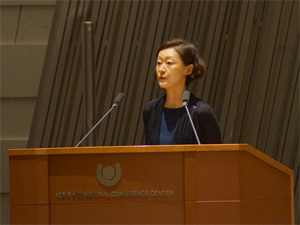 Dr. Goda presents her award lecture
at Neuro2013 in Kyoto.

Can you describe your current research interests?
I am very interested in synaptic plasticity and in particular, the interaction between different types of plasticity. More specifically we are trying to understand how activity at a given set of synapses can shape and influence neighbouring synapses. We are also interested in the contribution of astrocytes and the extracellular matrix in controlling synaptic properties.

Your undergraduate training was in chemistry. How did you become interested in neuroscience research?
My very first research experience was in an organic chemistry lab but I found it a little too dry for my taste. So then I decided to get more experience of biological systems and I took up a summer studentship working in a transcription lab on the project of bacteriophage transcription anti-termination. Following this, I decided to move outside of the nucleus and developed an interest in protein trafficking, a topic that I pursued during my PhD. During the course of my graduate studies at Stanford, I focused heavily on trying to understand the mechanisms and consequences of membrane protein traffic inside cells. However, towards the end of my studies I wanted to move beyond events in single cells and I became interested in cell-cell interactions. This is when I became fascinated by the brain and its functions. At first, I considered moving into developmental neurobiology but at that time the field was quite immature. Then I started learning about neural plasticity mechanisms, in particular long-term potentiation (LTP). I heard about the interesting in vitro studies that were being conducted in Chuck Steven’s lab at the Salk Institute in San Diego and I decided to join his lab for my postdoc.

How has your research evolved during the course of your scientific career?
Topic-wise it has made quite an evolution; going from tiny molecules and pushing electrons and looking at reaction kinetics in an organic chemistry lab and then going on to examine transcription anti-termination processes and protein trafficking before finding neuroscience and trying to understand the mechanisms of synaptic transmission and plasticity. Techniques are constantly evolving and we are able to do things that we couldn’t do 10 years ago. However, I think the evolution of the problem doesn’t change very much.

So you think technical advances have made a significant difference to the progress of neuroscience research in recent times?
Yes and one can be quite creative with it. There is a tendency for everyone to do the same thing, however. It would be nice to try and tackle things differently to what others are doing.

You have established labs in the US, UK and now Japan. How does research in Japan compare to the UK and the US?
I feel that I have yet to fully grasp the way research is done in Japan and that I am still finding my way around. Being at RIKEN BSI, I’ve been told that it is the most westernized neuroscience institute in Japan with Dr. Susumu Tonegawa as the director, who has his own lab back at MIT. So BSI is not a typical Japanese institute.

Do you have any advice for young researchers that are interested in pursuing research abroad?
Of course, there are places you’d like to visit and live but you have to consider what you want to do afterwards. If you want to stay in academia then choosing the right lab for your postdoc is really important. Be guided by your research interests, the quality of the lab and the type of project that you might get. Also consider how well you might fit into the lab, because you might be a person that is better suited to a smaller lab or you might be someone that thrives in a large lab, and talk to people in the lab and try to find out what type of interaction you will have with the PI.

You have published numerous high impact papers, do you have any advice for young researchers about publishing in high profile journals?
First and foremost, do good research. The papers will come if you have an exciting project with clean results, which is easily said as there are some fashionable topics that make it easier to publish than non-fashionable topics. But if you do good work and persevere, it will eventually be recognized.

What advice do you have for young scientists?
Enjoy what you are doing, and most importantly, know what you want, which is sometimes the most difficult.

Many congratulations on winning this year’s Tsukahara Award.
How did you feel about being awarded the prize?
I feel very much honored.

How were you notified about this award?
I first heard about it via email and then I received an official notification by post soon afterwards.

How was the award ceremony at Neuro2013 in Kyoto?
Dinner was very convivial and I had an opportunity to meet and talk to Professor Nobutaka Hirokawa, the current president of the Brain Science Foundation that awards the Tsukahara Prize, Dr. Yukiyasu Kamitani, the other awardee of this year’s Tsukahara prize as well as other grant awardees. I was also officially awarded the prize during the dinner. 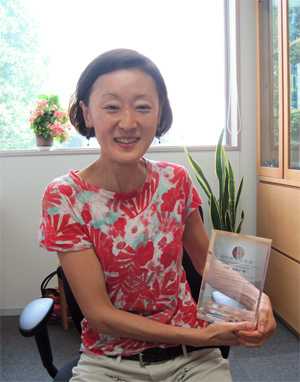 Dr. Goda with her award

This award was created in memory of Professor Nakaakira Tsukahara. Can you tell us a bit more about him?
Professor Tsukahara was a world leader in the field of neural plasticity and learning and memory mechanisms, especially on classical conditioning and synaptic plasticity in the red nucleus. He was also an excellent mentor as evidenced by the number of eminent scientists that came from his lab including Dr. Keiji Tanaka, deputy director at RIKEN BSI. His untimely death was a big loss to the international scientific community.

This award was established in 1986 and you are the second female scientist to win this award. How do you feel about this?
Again, I feel very honored and I think this is a terrific direction for science in Japan. I hope that more female scientists will become recipients of this award in the future.