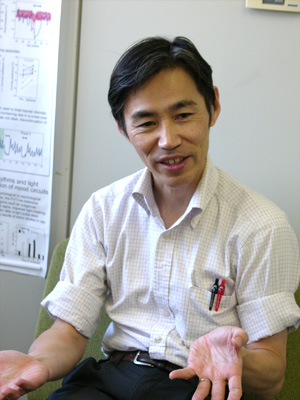 RIKEN Brain Science Institute Senior Team Leader Dr. Tadafumi Kato was recently awarded the Tsukahara Memorial Award for his work on the neurobiological basis of mental disorders. He was honored along with Dr. Kazuo Emoto of the University of Tokyo at the Japanese Neuroscience Society’s annual meeting, which took place in September, 2014 in Yokohama.

We caught up with Dr. Kato to discuss the award, which is named for the late Dr. Nakaakira Tsukahara of Osaka University, a protégé of Sir John Eccles, who passed away in 1985 following a plane crash. We were interested in Dr. Kato’s own career path, how he came to the study of bipolar disorder, his thoughts about the future of neuroscience, and his ideas about the trends in clinical and basic science research.

How did you become interested in neuroscience?
When I was a high school student, I was interested in psychology and psychoanalysis, and was reading Sigmund Freud and about consciousness, particularly about the role of dreams. Because of that I entered medical school at the University of Tokyo, but soon discovered that there was actually no psychology department there. Instead, I saw that we can study the mind, consciousness, and pre-consciousness using neuroscientific technologies, such as measuring brain activity in human subjects during REM sleep. I was so excited that even dreams can be studied by neuroscience methods that I decided to change my field to work on the brain in order to study the mind.

What early career path did you end up taking?
When I decided to study neuroscience, I thought that clinical work was only an entrance point to the study of the mind. I was faced with two choices: work in neurophysiology or work in psychiatry. Most of the extra class work in physiology was not as interesting to me but all areas of psychiatry interested me, so I decided to join the department of neuropsychiatry in the University of Tokyo. However, at that time, there was a movement against psychiatry research in the University of Tokyo that lasted about 20 years, and it was still difficult to study the biological basis of disorders. After one year at the University of Tokyo, I visited the department of psychiatry at Shiga University and was amazed at how many molecular biology, biochemistry and psychopharmacology laboratories were engaged in biological research. So I decided to move there.

How did you end up working on bipolar disorder?
When seeing patients who suffer from bipolar disorder, I became convinced that it is a disease of the brain rather than the mind. While bipolar patients are in a depressive state, they are immobile and cannot speak, but after only one night of sleep deprivation, they suddenly go into a manic state with excited mood and hyperactivity. They look as if they are a different person. I felt that there should be some biological phenomenon corresponding to this dramatic change in behavior. At the time, no mental disorders were understood at the level of molecules or cells, but were defined only by psychological phenomenon. The fact that each doctor had his or her own criteria for diagnosing and treating disease made it difficult to communicate with each other, and showed me how chaotic psychiatry was. It was as if psychiatry itself needed some treatment. I thought that to identify the biological basis of bipolar disorder would be to make a real innovation in this field.

Has the diagnosis and treatment of bipolar disorder evolved in Japan?
At the time when I started, most psychiatrists were focused on schizophrenia, because the symptoms of depression and depressive states in bipolar disorder appear to be simple and not so psychologically interesting. But actually the social burden of depression and mood disorders like bipolar disorder is heavier, and the need for treatment is even higher, though it had been neglected. Actually the complexities of schizophrenia led me to focus instead on bipolar disorder, which should be simpler to understand. At that time I could not imagine that it would take more than a quarter century to identify some causes of bipolar disorder. In terms of clinical practice, there has not been much change in diagnostic methods and there may even be misdiagnoses of bipolar disorder as schizophrenia. Because of this, many patients could not stop their episodes and had continuous cycles due to inadequate treatment. I felt that awareness of bipolar disorder should be promoted amongst both the general public and the psychiatrists, and decided to write some books to help the effort. Even without new treatment strategies, many patients can be rescued by enhanced awareness against the stigma of suffering mental and social problems.

Can you summarize your research on the biological basis of bipolar disorder?
Before I started in this area 25 years ago, it was thought that bipolar disorder was a disorder in intracellular signaling. This means that there’s a defect in signal transduction involving neurotransmitters. Nothing is conclusive yet, but our studies show a role for mitochondrial dysfunction in bipolar disorder. We think that that bipolar disorder is not simply a functional impairment of signal transduction, but rather a result of more fundamental cellular dysfunction, though it is still not known whether the neurons are dying or whether their dendrites or axons are damaged.

What is the current state of understanding of the genetic cause of bipolar disorder?
The role of genetic factors in bipolar disorder was studied in twins, but no causative genes have been identified, and one does not get it through family inheritance. We can only discuss risk factors for the disease. Many of the genes involved appear to be related to calcium signaling, as well as in endoplasmic reticulum and mitochondria, which store calcium within the cell. Once we understand how calcium signaling is affected, the next problem would be to find out how cells are affected by calcium pathway defects. To study this we have to find which part of the brain, and what type of cells are affected specifically by bipolar disorder. Endoplasmic reticulum and mitochondria defects are also causative for Parkinson’s disease, but they have been localized to substantia nigra dopamine cells, so we need an equivalent type of localization for bipolar disorder. Even using all the available neuroscience technologies, it will not be easy to find the biological cause of bipolar disorder. 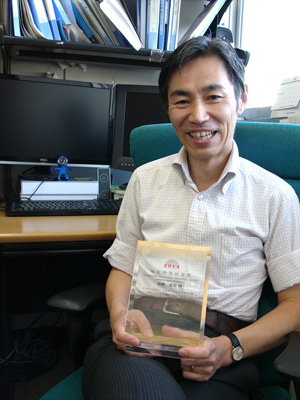 Your pioneering research led to your being awarded the Tsukahara prize. Can you talk about winning this prestigious award?
When I was a university student, I read Dr. Tsukahara’s book on neuroplasticity and memory. I am now 51 years old, the same age as when he passed away in a plane crash. However, I am not sure whether I have caught up with him. Looking at the past recipients, I believe that I have not reached the level of this award yet. I think I did not get this award for my past achievements, but rather the search committee understood the importance of mental disorders, and despite the difficulties in these types of studies, they gave me the award to encourage me to continue research in this area, and to promote the field of mental disorder research.

What is the future direction of research of human mental diseases?
The natural sciences study things and animals, and the social sciences study societies and people. Neuroscience is in between these two. The motivation to study the brain is to understand the nature of human behavior and human society, by applying technologies from physics and chemistry. It’s not a subfield of life science but rather its own field. I feel there are three major goals in neuroscience: understanding the brain, protecting the brain, and creating the brain, or in our context, connecting the brain, as in brain machine interfaces. My research is focused on understanding psychiatric disorders, and here, there’s a gap between clinical science, which is more descriptive and observational, and basic science, which uses animal models such as mice to try to find the causes of disease. I worked on clinical studies of bipolar disorder for 12 years at the university and 14 years of basic science work at RIKEN BSI. I would like to show that the combination of basic and clinical science is indispensable for understanding human neuropsychiatric diseases. The next two decades will be devoted to combining basic and clinical science to help us illuminate the brain.