On December 16, 2013, BSI Senior Team Leader Dr. Katsuhiko Mikoshiba was awarded the rank of "Chevalier dans l’Ordre national de la Légion d’Honneur" (Knight in the National Order of the Legion of Honour) for his achievements in the field of neuroscience and contributions to international cultural and scientific exchanges between France and Japan as well as the rest of the world. He was commended not simply for his impressive research achievements, but also for helping to nurture young researchers. We asked him about his feelings upon receiving the award and about his ideas on training young scientists.

How did you learn about the award?
I received a phone call at my laboratory from an officer of the French Embassy in Japan, on the evening before I was scheduled to leave for a business trip overseas. He said, “The President of France has decided to confer upon you the Legion of Honour.”
My immediate reaction was to answer, “Thank you very much. I am honored,” but in reality I didn’t know very much about the award! Everybody started looking up information about it on the Internet. And when I arrived in Sweden people acted genuinely impressed when I told them, and for the first time I realized it was really something special. The list of Japanese who have received it is pretty impressive. In the arts, filmmaker Akira Kurosawa, conductor Seiji Ozawa, architect Kenzo Tange, and painter Ikuo Hirayama, and among politicians, people like Hirobumi Ito, Japan’s first prime minister, Yasuhiro Nakasone, and Yoshiro Mori. Among scientists, mathematician Heisuke Hironaka is a famous recipient. I am the third person from RIKEN to receive it, with one of the others being Akito Arima, our seventh president, who also served as Minister of Education.

How was the ceremony?

The French ambassador began the ceremony with a speech where he gave a very detailed list of my past work. It was great to hear that research achievements from my team at RIKEN were being recognized around the world. I also learned that I was recognized not simply for serving as the president of Association Pasteur Japon, but rather for the larger contribution of appealing the importance of the France-Japan relationship on the world stage. I was surprised that the ambassador even mentioned my work as a foreign professor at the Karolinska Intitut in Sweden, receiving an honorary doctorate from that institution, and serving as a World Class University Professor at Seoul University in Korea. Consequently, it seems I got the award for many different things, including the research achievements I made along with my collaborators, and my work encouraging young researchers to embark on their own careers, along with my efforts to make these into international collaborations. 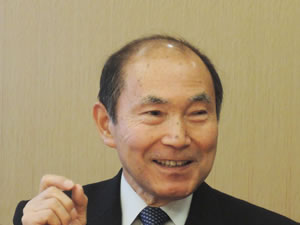 The fascination of neuroscience
In my second year of medical school, I decided that I wanted to study the brain, and in particular the development and division of the brain. Why the brain? Unlike other organs, it allows us to communicate with other individuals. The liver and other organs are involved in the maintenance of the body, to allow us to maintain homeostasis. But the brain and nervous system, in addition to their role in homeostasis, communicate with our sensory organs that let us listen, speak, and see, so that we can communicate with individuals outside of ourselves. And that is despite the fact that the brain is just one of our organs. No matter how hard it tries, there is no way the liver can communicate with other individuals! Because the brain is the only organ that can communicate, it is because we have brains that we can create human society. Culture and ideas are products of the brain. Therefore, the study of the brain involves studying the very existence of human beings. By achieving advances in neuroscience, we can become healthier as human beings, we can prevent tragic brain diseases, and we can make it possible to cure those that have already struck. We can pull civilization in a positive direction, and help build a more peaceful society. It’s easy to imagine how tragic it is if an individual’s brain makes and error and he ends up pushing the button to unleash atomic weapons. From that perspective, the brain is an extremely important organ that can be the key that decides whether humanity survives or not.

The meaning of discovery
"Discovery" means the uncovering of new principles that regulate life phenomena that are not yet understood. Discovery involves tossing away accepted concepts and adopting unique ideas based on free thinking rather than prediction. To do so, there are two important elements. The first is to personally acquire the ability to think in an open and flexible way. For this, it is important to have many experiences from a young age, and to come to an understanding of one’s likes and dislikes, and one’s strengths and weaknesses. By doing so, you can understand that "this is something I can be confident about." It is our strengths and weaknesses that make us individual. For that reason, we need many people who are free and diverse.
The second element is to create a diverse group of people. If people of a like mind gather together, they won’t be able to do anything original because they all think the same way. It is important to create a group where people come up with outrageous ideas. If you can get several such people, they will come up with crazy ideas. It is when diverse individuals come together that new ideas are born. Discoveries are made, and researchers who can make discoveries are born.

In research, if you have a 100 stones, and one of them turns out to be a gemstone, then you have achieved success. In our case, whenever we do something, we try to think of ten different ways to do it. It is common for one of them to lead to a discovery, and it is usually a method that we came up with out of curiosity. 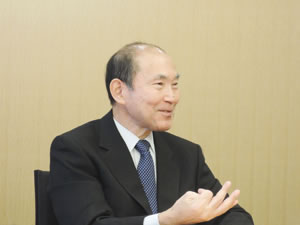 My ultimate aim in nurturing young researchers
Whenever young researchers or prospective researchers come to my lab, I observe them carefully, and try to determine what they are interested in and where their strengths lie. I may give a particular theme to a certain person, but I look around and try to pair them up or link them up with different types of people. In other cases, I simply give the person an overarching theme, and say, "try doing whatever you want." They will then come back to me, saying, "I’ve discovered this." If it seems like they’ve looked at the problem from a broad perspective, and found something interesting, I will always say, "How interesting!" Creating enthusiasm helps them in their research. And in time, they may discover something that could not be predicted.

The basic principle of research is to formulate a hypothesis, based on phenomena observed in the course of the research, and then to test it. If the results come out in line with the hypothesis, that is good, but what is most important is dealing with unexpected results. First, you need to make sure that there were no errors in the experimental techniques and process. Next, if you believe they were correct, then you have something with is in conflict with the basic facts accumulated up to then, so it is unpredicted and could lead to new discoveries. Pursuing such avenues builds confidence.

When I meet a young person, I begin my asking, "What interests you?" It’s very important to know what you like, what you are good at, and what you are not so good at. But it is quite difficult to do so with our current examination-based educational system. We really need to start with reforms there. It’s recently become accepted that education starting in kindergarten or earlier is very important. I’ve noticed that I am now often asked to give talks for parents with children in kindergartens or kindergarten teachers.

I am very fortunate to have trained about 40 researchers who have gone on to establish their own labs as professors or in other leadership roles. And I always have new people ready to go out on their own. It’s all because I was privileged to have good people come to me. The place and the amount of space you have isn’t really an issue. My lab is a sort of "league of extraordinary gentlemen," with people with very different characters. At one time, we had seven or eight people crowded into just about 13 square meters, so that it was impossible to get from anywhere to anywhere else in a straight line. But precisely because it was so small, we were able to communicate very closely. The people who were there at the time have all become professors, becoming unique leaders in different fields. They continue to keep in touch with one another, and have put out good results in collaborations. That is something that delights me.

The significance of basic research
We know almost nothing about the fundamental principles of life. And in brain science, the more we learn, the more unknown things we discover. We have to try out a variety of methods to learn about the fundamental things that have not been elucidated yet. The mission of researchers in basic scientists is to explore using a variety of methods. By doing so, they come to an understanding that "this phenomenon is taking place because of the following mechanism." In other words, if the fundamental mechanism is uncovered, it is possible to gain an understanding of how a certain problem leaders to a specific disease. I think then that this understanding can quickly develop into ways to fix those abnormalities and hence to treat disease. Conversely, if we focus on a single phenomenon from the beginning, in search for therapies for a given disease, we are looking at a single tree and failing to see the forest. It may turn out that the root of the problem was elsewhere. In recent years, basic and clinical have become very close to one another, and there have been many chances to collaborate, which I think is very positive.
I believe that we have to conduct experiments based on different hypotheses to develop new models of how the brain’s actions are regulated. By doing so we will be able to come to an understanding of the mechanisms between the brain diseases that cause so much distress to human beings, and this will lead to the development of therapies to treat them.
At BSI, we have a mission to constantly develop new concepts, make great discoveries, and always be at the leading edge of brain science.

This interview was conducted by Tomoko Nishiyama on December 24, 2013
Translated from Japanese by Jens Wilkinson, RIKEN
© RIKEN BSI 2014