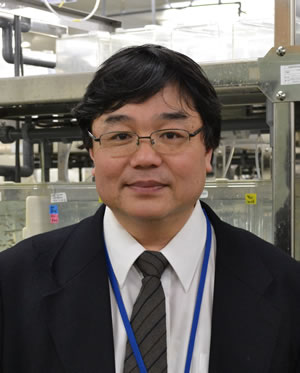 Hitoshi Okamoto, Senior Team Leader and a Deputy Director at RIKEN Brain Science Institute, was awarded the Tokizane prize; the annual prize given by the Japan Neuroscience Society for outstanding research. The award was presented at the Society’s annual meeting in Yokohama in September, 2014.
Dr. Okamoto began his career studying the development of the brain using zebrafish as a model system. However, in recent years the focus of his research shifted to explore the phenomenon of the mind, especially exploring the neural circuits underlying emotional behavior in both fish and mice. We asked Dr. Okamoto about his initial interest in neuroscience, what led him to change the direction of his research and current and future research challenges.

What was your path towards becoming a neuroscience researcher?
When I was in high school, I was an unusual student because I wanted to learn about either gravity or the brain. Later, I entered medical school, but before focusing on medicine I studied physics intensively. However, as I studied medicine, especially anatomy, I was enchanted by the order and beauty of the structures of body. Then, I became interested in how the brain develops and how this process is regulated. I spent the first 20 years of my career studying how brain development is regulated by genes and discovered that the basic design of the brain is conserved throughout evolution. I thought that by taking advantage of the conservation of the basic design of the brain, we could study the basic function of the brain in model organisms. By basic function I mean the mind. People usually think that lower animals don’t have any adaptive brain functions but since the structure turned out to be so conserved between, for example, the fish and human brain it is natural to think that there some functions of the brain would also be conserved. 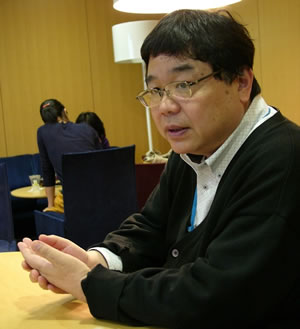 How did you choose zebrafish as a model organism?
I did my PhD by using Drosophila. But actually, I seem to have a phobia of insects and I didn’t feel like continuing my research using Drosophila, so I switched to fish. I feel a kind of innate affinity to fish. Watching fish at an aquarium makes my mind feel at peace.

Why did you switch your research focus from brain development to behavior a few years ago?
There was a revolution in biology near the end of the 20th century. It became apparent that the expression patterns of genes that establish the identity of various parts of the brain are very conserved in all vertebrate species. Therefore people started to think that the basic structure of the brain, including the structure of the telencephalon must be conserved. For example, the songbird community re-evaluated and renamed the parts of the songbird brain to emphasize the similarities to the mammalian brain. When I read a review article on this topic about 10 years ago, it resonated with me and I thought that if the structure of the brain is so conserved then someone like me, a molecular biologist who is essentially a reductionist should be able to use a much simpler animal to study the basic mechanism of the mind, like decision making. That’s when I had the idea to see whether zebrafish can be used for studying some aspect of the mind.

How did you make the transition to studying behavior using fish?
While talking with a friend, I learned that there was an attraction at the Aburatsubo Marine Park, an aquarium on the Miura peninsula, where fish acted out a kind of play, but really they were responding to light signals. In this attraction Parrot fish (ishidai in Japanese) acted out various scenes—a boy who gets up goes to school, stops at traffic signal and attends a class of mathematics and does some problems like 1+1=2. All of those behaviors are based on conditioned learning. I went to see the show and it was quite interesting. I then consulted with an animal psychologist, Prof. Shigeru Watanabe at Keio University, who had experience training goldfish and he taught us all the techniques. That was the start.

Was it challenging to change the direction of your research program?
We were able to get a relatively inexpensive but high sensitivity camera from a RIKEN spin-off company, Brain Vision, and we were also able to get funding that supports preliminary but ambitious research from RIKEN’s headquarters. With these we could obtain the first data and demonstrate that zebrafish exhibit active avoidance behavior. At that time I was still working on developmental biology and coincidentally my lab underwent external review and I presented many ongoing projects. During the intermission I was asked by one of the reviewers, “If God asked you: if you had only project to work on and I would help you to succeed, then what would you chose?” I told him that it was the behavioral study project. After this review I thought about what I want to do for the rest of my career and realized that this is what I want to do! At that time I decided stop every other project. 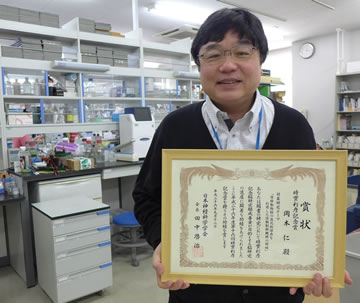 What are some big questions you would like to answer in the near future?
The questions we are now trying to tackle is how does the brain attribute value, good or bad, to a memory and also how we can make a behavioral program based on that kind of memory to cope with future events. This process, in other words decision making, is one of the most important functions of the brain. For the next few years I would like to focus on deciphering the neural mechanism for this function. Our group is also working on uncovering the mechanism of how the social relationships between multiple animals are determined. Social animals live in a societal hierarchy to avoid unnecessary conflicts and this is something that we would also like to understand.

About the Tokizane Prize:
Dr. Toshihiko Tokizane (1910~1973) was a pioneer of brain research in Japan. He established the first interdisciplinary department for the study of brain science at the University of Tokyo, bringing together researchers and clinicians from neuroanatomy, psychiatry, and neurosurgery, and spearheaded research using animal models. He also actively promoted brain science to the public, authoring several books in the 1950s and 60s introducing neuroscience to non-scientists. His work made a great contribution towards promoting brain research in Japan. The Tokizane Prize was established with funds donated by Dr. Tokizane’s widow to continue his legacy.